HIV is not able to enter through most of the surface linings of the body but can be passed to another person through mucous ‘wet’ membranes or damaged tissue or directly into the blood stream. HIV is present in the blood, semen, pre-seminal fluid, vaginal and rectal fluids and breastmilk of infected people. The level of virus in some fluids, such as saliva, is too low to be infectious. There are a number of ways in which a person can become infected with HIV:

Having other sexually transmitted infections such as herpes, syphilis and gonorrhoea can increase the risk of transmission. Genital ulcers can cause breaks in the genital tract lining or skin which can be an entry point for HIV and the associated local inflammation increases the number of cells in the secretions that can be targets for the virus. 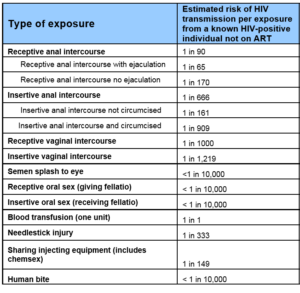 HIV antibody production begins around two weeks after transmission. HIV specific antibodies can be detected after four to six weeks in the majority of cases, and all available HIV tests are based on antigen-antibody binding.

Most clinics use newer 4th and 5th generation tests, which are recommended by BASHH and are able to narrow the testing window period to 4 weeks compared to the older 3rd generation tests where the window period is 12 weeks. They also have the added advantage that they require a smaller (50 µl) venous blood sample.

When interpreting HIV diagnostic tests, consideration should be given to the fact that HIV testing immediately after a possible transmission will not detect HIV antibodies.  Use of HIV RNA viral load testing, may detect earlier HIV infection [up to 10 days earlier] in patients who have symptomatic “seroconversion illness”. Specialist advise should be sought to advise on the HIV testing in this scenario.

HIV infection cannot be fully excluded until at least 4 weeks after a possible HIV exposure using a 4th generation test and after 4 weeks after completing post exposure prophylaxis [PEPSE].

National Guidelines for testing are from 2008 so are due for update. BHIVA 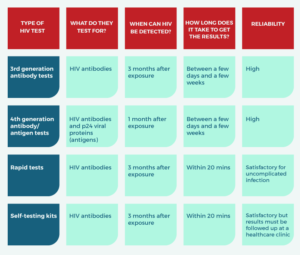 They also include reducing new HIV infections by 75% and achieving zero discrimination.In 2017, the global results were:

At time of writing 7 countries including the UK have already achieved the 90-90-90 targets ahead of 2020 schedule with many more on track. They are Denmark, Botswana, Cambodia, UK, Eswatini, Namibia and the Netherlands, 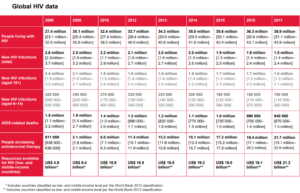 The latest data from 2018 is very positive.

The UK celebrated being one of only 7 countries in the world to have met the UNAIDS 90-90-90 targets ahead of the 2020 completion date.

In addition, there had been a substantial decline in the rate of new HIV diagnoses

This recent reduction has been mostly driven by fewer HIV diagnoses among gay and bisexual men, which have decreased by almost a third since 2015.

Up until 2015 rates had been increasing year on year so this has been a monumental shift in the epidemic. It is most likely driven by a number of factors:

There have also been steady reductions in new diagnoses among black African and black Caribbean heterosexuals over the past decade from 2,655 in 2008 to 594 in 2017. This is largely due to changes in migration patterns, with fewer people entering the UK from high prevalence countries.

For the first time, there has also been a drop in the number of diagnoses reported among other heterosexuals, which fell by 20% in 2017. Previously, diagnoses had remained stable at around 1,000 diagnoses per year in this group. The cause of this change is uncertain at present. Continued low numbers of HIV diagnoses were reported in injecting drug users (140) and people who acquired HIV through other exposure routes (90), such as mother to child transmission and recipients of blood/tissue product.

London continues to have the highest rates of HIV in the country with 36% of all new diagnoses and 39% of people accessing HIV care in 2017. Lambeth is the London borough with the highest proportion of residents who have been diagnosed with HIV at 15 per 1,000.

The overall mortality rate for people aged 15-59 who were diagnosed early was, for the first time, equal to that of the general population for the same age group

Despite this good news, significant challenges remain to the control of HIV in the UK. The proportion of people diagnosed at a late stage of infection (CD4 count< 350cells/mm3) has remained persistently high over the past five years at close to 40%. Late diagnosis is associated with a ten-fold increased risk of short-term mortality (within a year of diagnosis) and an increased risk of onward transmission, with people diagnosed late having been unaware of their HIV infection for approximately three to five years.

The population of people living with diagnosed HIV infection receiving care (93,385) is growing older and diversifying. In 2017:

The ageing cohort of people living with HIV emphasises the importance of integrated care pathways to manage co-morbidities and other complications such as polypharmacy and the consequential potential drug interactions. 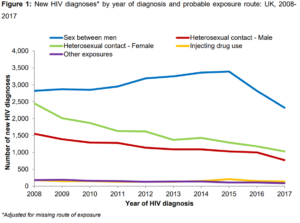